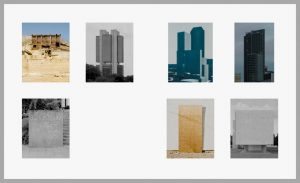 Daniel Shea’s new book ’43-35 10th Street’ is about architecture and its relationship to ideological and socioeconomic shifts.

We were delighted to work with Daniel to produce a selection of giclée mounted prints, exhibited at the Webber Gallery, London to coincide with the book launch this March.

The work began with a simple premise; for Shea to observe the residential real estate boom in his neighbourhood of New York City, Long Island City. This type of development boom, happening in cities globally, is a distinctly late capitalist solution to the perception of housing needs.

Images of Long Island City in New York are juxtaposed with the government buildings in the famed Brazilian city of Brasilia, built ex-nihilo 50 years ago. Images of a dying California industrial town suggest a cycle of dissolution, real estate value, and entropy.

Architectural forms, from disparate places and historical moments, evolve and echo. If modernist architecture reflected a utopia of civic engagement, neoliberalism’s departure comes in the form of a utopia of consumer engagement.

Establishing the studio as a site of artistic production, surrounded by a different form of labor that builds cities, he aims to construct an analogy between his own mobility and the macro flow of capital that is ever present in our globalized world.