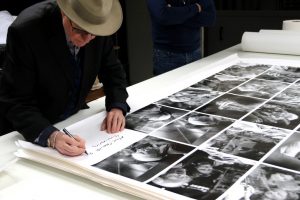 Metroprint are delighted to have collaborated with the Institute of Contemporary Arts in producing their latest print edition: Andy’s in Town by Marc Camille Chaimowicz (b.1947), made exclusively for the institution and available through the ICA Bookstore.

Taken in 1975, the edition is composed of multiple images Chaimowicz took on his Olympus OM-1 during the 1975 book signing for The Philosophy of Andy Warhol (From A to B & Back Again) in Foyles Bookshop on Charing Cross Road. During the event, Chaimowicz began to critically question his actions within the fandom of the situation, leaving before getting the chance to meet Warhol. Forty years later, he chanced upon an unprocessed roll of Ilford Delta 400 to find the photographs he had taken during the wait, the results of which we see here.

‘Produced as a traditional silver bromide print, the enlarged contact sheet envelops the viewer, eliciting a visceral response. Physically glossy, as Warhol himself was, the material qualities of the work communicate the essence of the era during which the photos were taken and the circumstances of their capture – through the store window. Recording, almost romantically, the action of Warhol signing his book, alongside the adoration of his fans, the edition communicates the disquieting position of the voyeur, the silent, all-absorbing watcher. Warhol, a famous voyeur himself, is here out-voyuered by Chaimowicz.’ – ICA, 2018

Chaimowicz’ images have been reproduced digitally as a single B&W Silver Gelatin, Fibre-based limited edition of 20 prints and 5APs, at 50×70″. Later this month, the edition will be accompanied by a publication of the same title, launching at Paris Internationale 2018. You will also get the chance to see the images in a future exhibition, to be produced by Chaimowicz in 2020.

The edition can be purchased directly through the ICA here.

You can also catch the edition on display with ICA (Booth 20) for Frieze Art Fair, 4th-7th October 2018.