London Nights at Museum of London 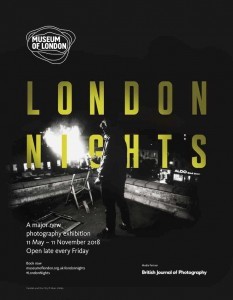 A new major exhibition London Nights opens at the Museum of London this month, in which the diversity of the city of London after dark is explored, through both contemporary and historic imagery, ranging from the late 19th century to the present day.

Split into three sections the exhibition focuses on London Illuminated, which showcases the variety of ways in which photographers have been inspired by and captured the aesthetic of the city at night, depicting London illuminated by limited natural and artificial light in contrast to the familiar daytime.

Dark Matters explores the mysterious, unknown and potentially uncomfortable – the darker side of the city. In this section, visitors will be immersed in imagery relating to night-walking, the blackout of the Blitz, isolation, threat, and vulnerability.

The final section Switch On…Switch Off…focuses on Londoners at work, rest and play in the city after dark. From the familiar commute home, the quick change of pace as office workers head out for the night or as workers commence their night shift

The diverse exhibition features immersive film plus over 200 images from more than 50 artists, including lesser known and emerging photographers to the more established and recognised Bill Brandt, Alvin Langdon Coburn and Rut Blees Luxemburg.

Metro is delighted to have been involved, producing C-type and Black & White fibre prints and scanning images for photographers who have work featured in the exhibition: Will Eckersley’s 2011 series ‘Dark City’, images from the late Tish Murtha’s 1983 project, ‘London By Night’ and Marc Vallée’s 2016 project, ‘Vandals in the City’.

There will also be a range of programmed events happening at the museum in relation to the exhibition including evening, weekday and weekend workshops and events. Further information can be found here.