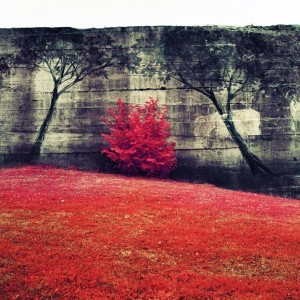 British photographer and filmmaker Lynda Laird worked with Metro recently using our Direct to Media printer to print images directly onto silk for her installation in the Planche(s) 2017 Festival. Now in its eighth year, this photography festival presents the works of a variety of photographers invited to spend a residency in Deauville, France.

The inspiration for Lynda’s installation was taken from the events that commenced on 6th June 1944, when allied forces launched the biggest amphibious military attack in history, known as the D-Day Landings. Codenamed ‘Operation Overlord’ the landings marked the start of a long and costly campaign to liberate north-west Europe from German occupation, it was the beginning of the end of WW2.

Lynda’s photographs were taken in and around the coastal bunkers that formed part of the Atlantic wall along the Normandy coast from Utah beach to Deauville.

Lynda explains, “In part, I used infrared film – created by the military in WW2 to detect camouflage and expose a visual spectrum that’s invisible to the naked eye.  Silk and Japanese mulberry paper forms part of this installation, both were important technologies specific to WW2; escape maps were printed on to silks and stitched inside officers uniforms, mulberry paper was used for this purpose as well as for creating balloon bombs.”

Also included in her installation is a video shot in the sea of the D-Day beaches at the exact time of the landings. The words spoken in this video are a diary entry from 6th June 1944, by Odette Brefort who lived in Deauville during the German Occupation and throughout WW2. As a member of the French Resistance she provided military intelligence on the German defences by drawing intricate and beautiful maps to send to her comrades in Paris.

Oh, what a night! My little head is all shell-shocked.

Since midnight it’s been impossible to sleep: the humming from planes, the anti-aircraft bombs, the machine gun noise.

I went downstairs because I couldn’t sleep and after 15 minutes it went quiet. Thinking it would be better, I went back to bed. What a mistake!

All night, the humming from planes, it was non-stop.

What a joy when waking this morning, someone announces there was a landing at Dives.

At 8.20am a bomb falls on the Printemps store, another one on the Normandy.

By rule we don’t have the right to leave Deauville, or to ride our bicycles.

The weather remained foggy until midday, the sun shone from 4pm. It must be the English who brought the clouds! The defence volunteers will be able to move freely tonight.

Around 6pm, what a tremendous bang! It is the Mont Canisy.  The English navy must have blown up a large artillery battery that was shooting at them. It had been deafening us since this morning.  I think the shot hit the target, as we can’t hear a thing anymore.

What on earth will happen to us when the Navy and Air Force take care of our region?

There is no electricity.  Deauville is in the dark.