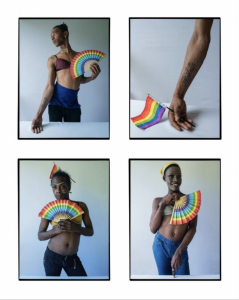 Metro is delighted to be collaborating with Michael Hoppen Gallery to produce bespoke framing and mounting for Tim Walker’s ‘The Gully Queens‘ to be shown at Photo London 2018.

“I found the notion of an aggression towards homosexuality in Jamaica sad and regressive. To me, the Gully Queens are emblematic of this injustice which is what led me to photograph them.” – Tim Walker says of this particular work.

Pop by the Michael Hoppen Gallery Stand C1 at Photo London fair to see this beautiful piece on show and chat with their wonderful team.

Health, Safety and Housing concerns continue to go unaddressed for a subset of the Homeless & Displaced LGBT persons who reside across Jamaica. Many have resided in the storm drains of the business district known as New Kingston have also repeatedly been displaced by the police and city council. They continue to be engaged in sex work as a means of survival which increases their health risk as higher paying clients often demand unprotected sex. There is also an increase in the use of alcohol and illicit drugs (shown by 85% of respondents who use alcohol and illicit drugs to suppress their depression) which can be sources of vulnerability. 99% of the clientele have indicated that their drug and alcohol use significantly affects their practice of safe sex.

The Gully Queens have both physical and mental scars as evidence of trying to survive on Jamaica’s volatile streets. Because they do not conform to gender norms, they have been disowned by family, threatened, stoned, attacked, and even shot. They are repeatedly evicted from spaces where they have sought refuge, and arsonists often set fire to their belongings. They are nomadic, and have in some cases have developed dysfunctional behavior as means of survival, disrupting the broader communities where they live. The majority express the desire for stability, and the need to see hope for the future.

Since 2015, the Gully Queens Charity has been able to secure a series of small grants that have allowed short-term/ emergency interventions by taking many of the homeless LGBT community off the streets. Larry Chang Foundation’s program is designed to reduce premature death and restore hope within our clientele by providing: