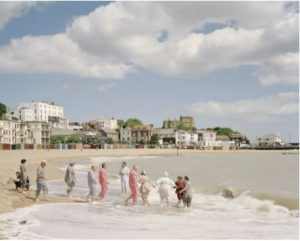 British Photographer Simon Roberts is renowned for his images of events and places across Britain that have drawn people together in public, reflecting on the nature of our shared histories and communal experiences.

Metro is delighted to have produced a selection of matt Lightjet prints for his upcoming exhibition ‘Merrie Albion – Landscape Studies of a Small Island’ which opened at the Flowers Gallery this month. It brings together some of his iconic images along with many previously unpublished photographs.

Creating a view of contemporary society that is far from straightforward, Roberts critically conflates the traditional genre of landscape with social documentary, layering ideas of national character through relationships to both place and particular moments in time.

The exhibition showcases a variety of Robert’s work from single images from around the time of his major photographic project ‘We English’, to his work as the official artist of the 2010 General Election as well as his series ‘National Property: The Picturesque Imperfect’.