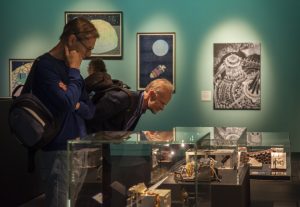 To celebrate 50 years since NASA’s Apollo 11 mission and the first humans landing on the Moon, the National Maritime Museum presents The Moon, the UK’s biggest exhibition dedicated to the Earth’s most important satellite.

Featuring over 180 objects from national and international museums and private collections, the exhibition explores our relationship with the Moon over time and across civilisations from a cultural and scientific perspective.

Significant objects on display include the “Snoopy Cap” Communications Carrier, worn by astronaut Edwin “Buzz” Aldrin, and Hasselblad camera equipment that captured some of the most recognisable and iconic images of the 20th century.

Visitors will also have the unique opportunity to get close to a range of moon rocks such as lunar samples collected from NASA’s Apollo missions and the Soviet Union’s Luna programme, as well as a rare lunar meteorite from the Natural History Museum’s collection.

Historical and contemporary artworks will also be part of the exhibition, illustrating how the Moon has long inspired artists. Metro Imaging produced a series of moonlit scenes that will be displayed printed directly on Dibond, using our Direct to Media technology; as well as an assortment of handmade Bespoke Frames. Featured artists include J.M.W. Turner and John Constable, alongside contemporary pieces by Katie Paterson, El Anatsui, Chris Ofili, Sean Thomas Allen and Leonid Tishkov; and artworks by Cristina De Middel, Aleksandra Mir and Larissa Sansour.

Video artist Christian Stangl will also take part in the exhibition showing a new and exclusive version of his film ‘Lunar’, in which animated photographs from Apollo missions allow visitors to experience the Moon landings through the eyes of the astronauts. Apollo objects will sit alongside film posters, books, comics and magazines that celebrated and questioned these momentous events.